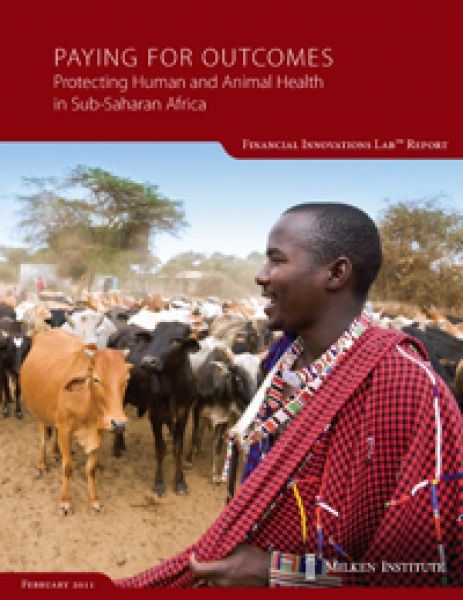 In 2010, economic growth in Sub-Saharan Africa was hampered by agricultural diseases that sickened or killed livestock and contaminated crops. Vaccines, natural pest control, and better grain storage options were identified as options to dramatically improve the health and economic prospects of the region's farmers. However, neither government nor private-sector initiatives had been successful in addressing these challenges.

A Financial Innovations Lab hosted by the Milken Institute with support from the Bill & Melinda Gates Foundation was held in London in October 2010 to examine two of the primary threats to sustainable agricultural development in Sub-Saharan Africa- contagious bovine pleuropneumonia (CBPP), a damaging respiratory disease that strikes cattle, and aflatoxin, a toxin that causes liver disease and reduced immune function in both humans and livestock. Participants included representatives from development finance institutions, philanthropy, academia, government and NGOs, as well as scientists, vaccine manufacturers and peanut traders.

A pay-for-performance model was identified as the most promising approach to sustainable agricultural development and biocontrol adoption in Sub-Saharan Africa. In order to pilot this model, the group recommended the implementation and planning of surveys and the determination of the award amounts. Furthermore, the group emphasized the need for collaboration among donors, research organizations, governments, the private sector, the media, and non-governmental organizations as an important next step. The participants suggested that lessons drawn from other examples of results-based economic incentives (known as “pull-based” mechanisms) and related solutions in the pilot country Nigeria could help inform the adoption of biocontrol in other countries.

At the 2010 G20 Summit, the governments of Australia, Canada, the UK, and the United States, in partnership with the Bill & Melinda Gates Foundation, established the AgResults Fund- a $122M fund administered by the World Bank to focus on increasing crop yields and quality, harvest management, livestock, and nutrition by utilizing pull mechanisms to overcome market failures.

Virtuous circle for east Africa: Regional capital market integration is the only option