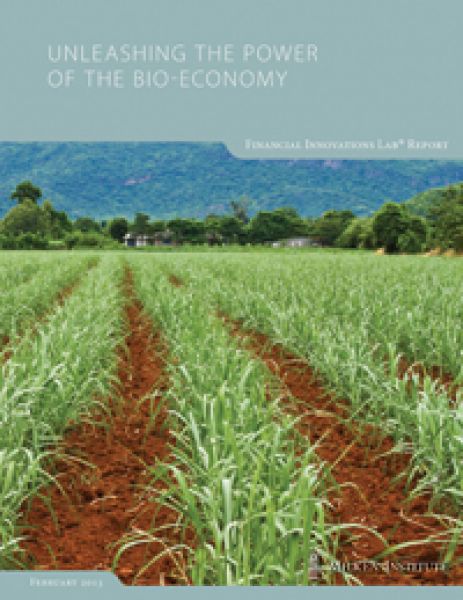 In 2012, the United States was poised to begin converting 20 percent of petrochemical consumption to bio-based products, creating jobs, reducing greenhouse gas emissions, and capturing a large share of the global renewable chemicals market. However, the required bio production capacity was estimated to cost close to $50B and, with government budgets limited, would need to come from private investors.

In April 2012, the Milken Institute, with support from the United States Department of Agriculture, hosted a Financial Innovations Lab to discuss various ways to spur the industrial side of biotechnology, the bio economy. Participants representing finance, policy and industry identified three significant barriers to the development of new bio-fuels in the United States: longer timetables than investors can tolerate, highly competitive and volatile petrochemical market pricing to which renewables are tied, and the tight regulation of biofuels that is typically more onerous than that of traditional petrochemicals which benefit from long-standing exemptions and tax credit supports. Participants proposed many innovative ideas including a new array of green banks to finance small, experimental projects, government back- stopping of investments, investor first loss de-risking of projects, and better administration of existing agricultural programs to bolster bio-based businesses, among others.

Economic Cooperation and Prosperity in the Middle East | A Conversation with Adam Boehler, CEO, US International Development Finance Corporation

From the Sidelines to the Frontlines: Essential Workers and the Gig Economy