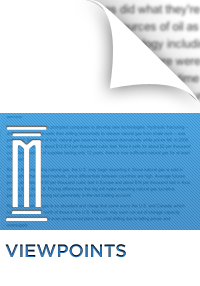 What’s in it for the United States? On the Constitutionality and Legitimacy of the Financial Stability Board (and International Financial Regulation)

The fact that legislators discuss and grapple with FSB policies is in itself a testament to just how far “soft law”—non-binding, international accords between regulators—has come.  When discussing policies, international policymakers routinely reference FSB principles and best practices, and even domestically, in the United States, administrative agencies from the Federal Reserve to the Securities and Exchange Commission grapple with and publicly acknowledge notions of international regulatory “commitments” and “obligations.

That US agencies take the FSB and other international standard setters seriously does not, however, a constitutional crisis make.  By definition, international soft law standards do not create any formal obligations.  They are not treaties under the Vienna Convention on the Law of Treaties or under Article II of the US Constitution.  Instead, both the FSB’s original charter and its revision (as well as virtually all other international standards) explicitly state:  “This Charter is not intended to create any legal rights or obligations.”[1]

As informal organizations, the FSB, Basel Committee, IOSCO and other regulatory bodies instead rely on their members to participate in discussions, and after participating, to voluntarily implement those standards at home by crafting them to their local conditions.  In the United States, this implementation is done in accordance with the Administrative Procedure Act and other internal agency policies, as well as in keeping with the mission and mandate of the specific regulator involved.  A bilateral or multilateral memorandum of understanding on enforcement coordination, for example, is justified and operationalized on the basis of the SEC’s core mission of investor protection (which necessarily requires cross-border cooperation in today’s globalized financial markets); similarly, articulations on interest rate benchmarks speak to concerns regarding capital allocation in global markets (and again require cross-border cooperation). Even the more recent but controversial rule on asset managers speaks to core concerns among regulatory agencies on the impact of shadow banking on financial and price stability, and capital allocation.

Furthermore, as a tool for achieving the mission of regulatory agencies, international standard setting bodies like the FSB enjoy both functionality and usefulness—and even as informal instruments can exhibit considerable “compliance pull.”  Markets, for one, often take direction from best practices in an assumption that they provide an indication or roadmap of future regulatory rulemaking.  Meanwhile, regulators recognize that in order to influence other countries, they can’t lead from behind.  Instead, they have to lead by example.

Fortunately for the United States, its ability to impact global standard setting bodies is in many ways unmatched:

With all this in mind, however, let me be clear: the FSB (and indeed global standard-setting more generally) is no panacea.  A number of issues can and do confound the process.  In part because of their informality, mandates and missions of international standard setting bodies can (and at times do) overlap.  This causes intermittent turf wars (most notably between the FSB and IOSCO—two relatively young standard-setting bodies seeking to establish credibility) that do not always speak well of international diplomacy or financial regulation.

Furthermore, even though the FSB and other standard setting bodies may be constitutional, they do not always boast the kind of popular or policy legitimacy some US stakeholders would prefer.  This lies in part from the turf wars described above.  Dissension between international standard setting bodies, which can be an expression of honest disagreement or the political posturing of competing bureaucracies, by definition leads outsiders to conclude that one party is “wrong,” undermining the sense that the substantive output, perhaps of both agencies is of the highest quality.  Furthermore, legitimacy can be undermined because of the complicated institutional arrangement supporting the rulemaking, and the at times opaque nature of decisionmaking.  Indeed, some standard setting bodies do not always practice notice and comment procedures allowing for the same levels of non-governmental and stakeholder participation that one expects here in the United States.

In my opinion, however, these challenges, do not merit a wholesale unwinding the work of cross-border standard setting, or the FSB in particular.  For one, the turf wars played out internationally also have domestic drivers.  The SEC, for example, does not participate in G20 meetings like the Federal Reserve and Treasury do, and is overshadowed by both in the FSB.  Thus its best opportunity to articulate and advance its vision internationally is through IOSCO, which it dominates and where neither the Federal Reserve or Treasury have a seat.  That policy discord can subsequently arise at the international level, given the varying priorities of prudential and market supervisors, should thus not be surprising.

Second, jettisoning or (erroneously) maligning the international architecture as unconstitutional would undermine, as already spelled out above, an important strategic advantage the US currently enjoys—the ability (to resuscitate the objectives of the TPP) to “write the rules of the 21st century,” with if not an American pen, at least with a good dose of US ink.

Third—and this is a point opponents to international financial regulation often miss—the FSB, and international standard setting bodies more generally, do not only write rules, but they also serve as the basis of more streamlined cross-border financial services.  To the extent to which, for example, the FSB is able to articulate shared paths on issues like capital, margin, interest rate policy, and reducing credit rating agency reliance, it is facilitating the interoperable and harmonized provision of cross-border services. Moreover, regulators use the logic and principles embedded in the standards to justify the recognition of market participants (including those in the United States) as equivalent.  And when this is done, it is done via the mechanism of soft law (and often explicitly referencing FSB, IOSCO or Basel Committee reforms).  From this standpoint, some intellectual consistency is required:  if international standard setting bodies are to be applauded for establishing the conditions for more efficient cross-border finance, and effectively lower regulatory burdens, they can’t be condemned as illegitimate when they raise them in order to safeguard markets.

Again, I do not wish to downplay the considerable challenges of international regulatory policymaking.   Even with the overwhelming influence practiced by the United States, we still have to negotiate with our partners, and occasionally make compromises.  And compromise is slow, and won’t always get to the best results for the United States.  So we have to be agile and tailor our domestic practice in ways that speak to international commitments credibly while also achieving our own prudential and market objectives. Furthermore, turf wars can compromise the effectiveness of international financial regulation, and even undermine the robustness of global reforms.  That said, these are procedural and institutional challenges—indeed, challenges that the US is in an enviable position to address with the right political (and regulatory) will.  The ideal Congressional oversight would elevate these concerns to the top of the regulatory agenda, and not promote strategically maladroit initiatives targeting our very tools of economic statecraft.