By Caitlin MacLean and Dale Bonner 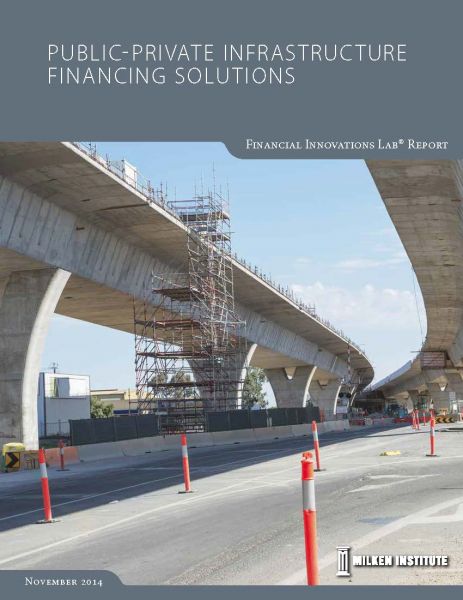 By Caitlin MacLean and Dale Bonner

Infrastructure is the backbone of a nation’s economic prosperity and crucial for growth. The American Society for Civil Engineers graded America’s infrastructure a “D+” in 2013 and estimates at the time suggested the US would need to spend approximately $3.6T to maintain, update, and expand its infrastructure by 2020. With government budgets stretched and infrastructure spending needs growing, alternative sources of capital were critical to bridging the funding gap.

To address this, a Milken Institute Financial Innovations Lab, convened in Washington, D.C. in early 2014, explored solutions. Participants included public and private infrastructure stakeholders.  The participants discussed ways in which the public sector could use limited public funds as well as unlock every possible source of private sector investment. The group also discussed policy and regulatory changes needed in order to remove barriers to investment in key sectors of infrastructure and to enable the creation of effective public private partnerships. Lab participants generated ideas, which included the establishment of an infrastructure exchange network, the creation of a national infrastructure council, and the chartering of a national infrastructure bank that can move capital into projects. Lab participants further agreed that this federal “I-bank” should have a primary mission of attracting capital from the private sector to stretch the decreasing amount of federal dollars spent on infrastructure projects.