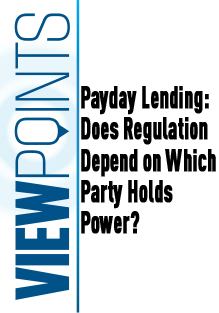 When a borrower receives a so-called “payday loan,” he or she writes a check that is postdated to the next payday or signs over permission for the lender to make an electronic withdrawal of the amount borrowed, plus fees, on that day. Converting these fees into interest rates yield very high rates, reaching levels often considered outrageous or unethical. Indeed, in states where payday lenders are permitted to operate, the typical rate on a $300 payday loan, when annualized, can easily exceed several hundred percent. And individuals collectively spend $9 billion annually on payday loan fees.

Given the heightened focus on the two parties during the presidential campaign and the controversy surrounding the payday lending industry, it seems appropriate to examine the validity of these assumptions. We can begin to draw a picture of the situation by noting the states in which one party controls both the governorship and legislature and whether the practice is legal or banned. (Most states held elections in November 2014.)