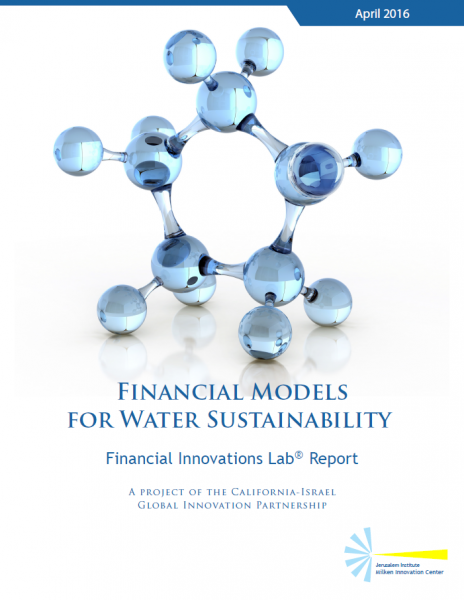 In 2015, NASA data showed that California reservoirs contained only one year of water supply and California’s total water storage had been in decline since before 2002. California was in a drought and its water management system was deemed unsustainable.

To discuss water conservation in California, The Milken Innovation Center at the Jerusalem Center for Israel Studies held a Financial Innovations Lab in Jerusalem, Israel in July 2015.  Participants discussed various gating issues such as the need for policy change, creative financing, technological innovations and behavior change. The specific focus of the Lab was to discuss how Israeli water-saving technological and financing innovations can be replicated in California. The technologies described included water recycling, smart water systems that predict and detect waste, “nutrigation” (application of plant nutrients for optimal development and best yields) for conventional and new low-water crops, irrigation that reduces water use, and desalination that converts seawater and brackish wastewater into useable, potable water. Participants further concluded that by introducing new capital structures in systems financing and new water services models, the technologies that have taken root in Israel can indeed meet California’s water challenges.

Principles for Shared Use of Mining Infrastructure: Tapping into Win-Win Solutions for Mining Companies, Governments, and Communities