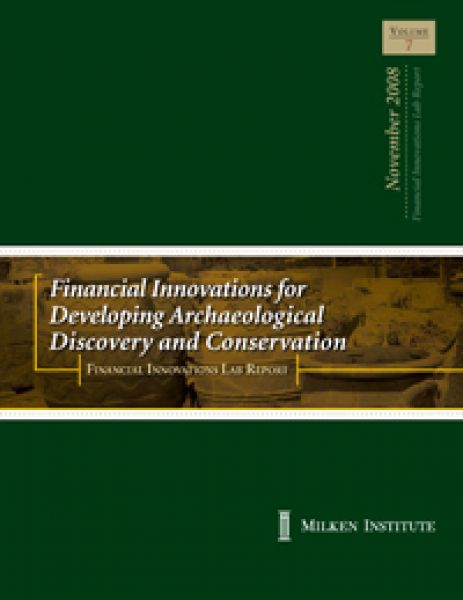 In 2008, demand for antiquities had created a $55B global market.  However, most countries of origin were archeologically rich but economically underdeveloped and lacking in the political will and resources to police illegal trade.  Looted antiquities often left behind a wide swath of economic, environmental and cultural degradation and created a missed opportunity for the country of origin to benefit from the value of its cultural treasures.

A Financial Innovations Lab held by the Milken Institute with support of the Cultural Policy Center at the University of Chicago in Santa Monica in January 2008, hosted an esteemed group of economists, museum representatives, attorneys, collectors, antiquities dealers and members of the archaeology community to discuss potential regulatory and economic innovations and incentives to promote legal discovery and conservation, while at the same time stop or at least mitigate the effects of looting. Participants suggested shifting the focus from object-specific value to creating site-specific value and called for increased funding for archaeological development, researchers and academics, antiquities trade law enforcement and related government agencies as well as local cultural ministries.