By James Barth and Moutusi Sau 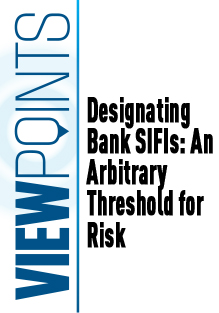 By James Barth and Moutusi Sau

In response to the recent severe financial crisis and the worst recession since the Great Depression, the U.S. Congress enacted and President Obama signed into law the Dodd-Frank Wall Street Reform and Consumer Protection Act (DFA) in July 2010. An important objective of DFA is to mitigate the threat to financial stability posed by systemically important financial institutions, or SIFIs. Should any of these institutions fail, the entire financial industry would be adversely affected and most likely the broader economy as well. The Financial Stability Oversight Council (FSOC) was established by DFA to identify any and all SIFIs, which are then subjected to enhanced prudential supervision by the Federal Reserve Board. Section 165 of DFA, however, requires that bank holding companies (BHCs) with $50 billion or more in consolidated assets must be designated as SIFIs.