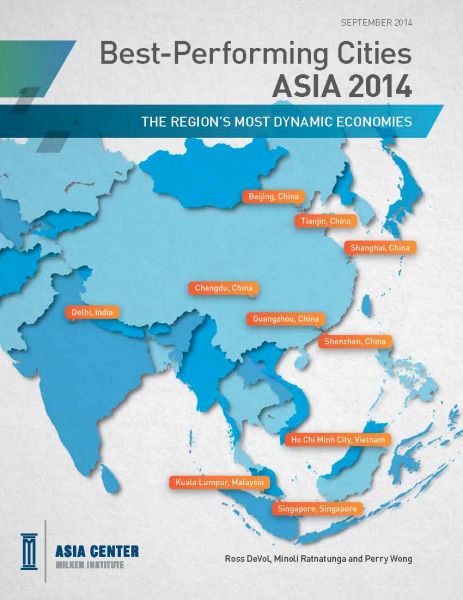 This is the Milken Institute’s first-ever ranking of the economic performance of Asia’s major cities, revealing that in creating jobs and vibrant urban growth, the Chinese dragon still roars. Of Asia’s top ten cities, six are in the People’s Republic. Top of the pack: Shenzhen, the birthplace of modern Chinese economic reform.

As the first of modern China’s special economic zones, top-ranked Shenzhen remains a major production hub, boosting factories that employ tens of thousands of workers who produce iPhones for Apple and assemble components for many other firms. Yet lately the city’s rapid progress up the economic ladder has been fueled by higher value-added – and better-paying – industries such as telecommunications, finance, and biopharmaceuticals. Three other Chinese cities – Guangzhou, Chengdu, and Tianjin – rounded out the top four. Outside of China, Asia’s best-performing cities span the region, with India’s Delhi (#5), Malaysia’s Kuala Lumpur (#6) and Vietnam’s Ho Chi Minh City (#9) all claiming top ten spots. Singapore comes in at 8th, the only developed economy among the top 10, a remarkable showing since the survey’s methodology rewards fast-growing cities.

FinTech in the Philippines: Assessing the State of Play

Towards Successful Aging in Asia