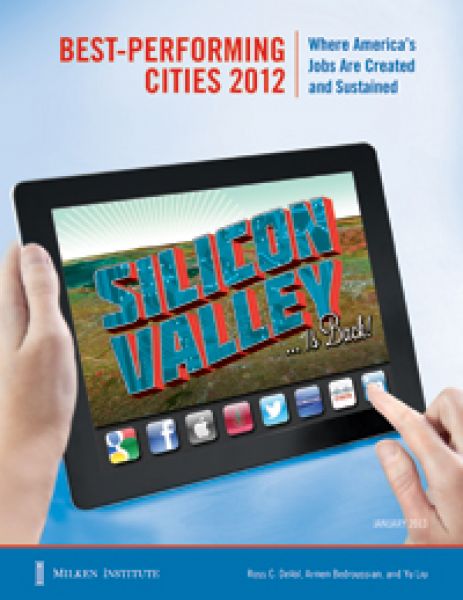 The Milken Institute's annual Best-Performing Cities index includes measures of job, wage, and technology performance to rank the nation's 200 large metropolitan areas and 179 smaller metros. Unlike other "best places" rankings, it does not use quality-of-life metrics, such as commute times or housing costs. In the Institute's index, employment growth is weighted most heavily due to its critical importance to community vitality. Wage and salary growth measures the quality of jobs created and sustained.

The index indicates that tech is back, especially in the world's best-known hub of innovation. The United States' best-performing metro area is San Jose, the capital of Silicon Valley. Other cities with strong exposure to technological innovation scored high in the new ranking: Austin, Texas (No. 2, up from fourth place); Raleigh, N.C. (No. 3, up from No. 14); the Washington, D.C., metro (No. 5 from No. 17); and Cambridge, Mass. (No. 8 from No. 12).

Best-Performing Cities 2017: Where America’s Jobs are Created and Sustained