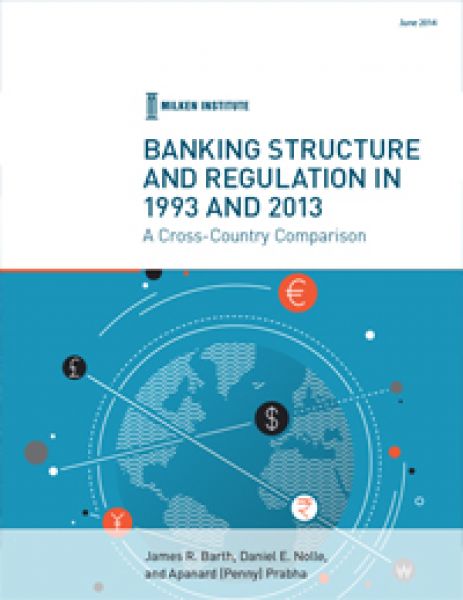 The global financial crisis of 2008-2009 generated a flurry of policy responses, at the national and international levels, to reform financial markets. To date, the primary focus has been on reforming the operations of the banking industry, particularly by strengthening regulation and supervision. In contrast to the somewhat uneven progress on policy measures targeting nonbank financial institutions and markets, many banking system reforms have been fully implemented, or are in the process of being implemented. Given these circumstances and the timing—it has been well over five years since the full eruption of the global financial crisis in fall 2008—we pose this question: "What is the status of banking regulatory and supervisory policies around the world now?" A corollary question immediately arises: "Current status, as compared to what?

The purpose of this paper is to answer those two questions, exploiting our unique vantage point: Two decades ago, two of us (along with a third co-author) constructed the first detailed and wide-ranging cross-country data set on banking structure, regulation, and supervision, and established the "prototype" pattern for analyzing such data. Since then, subsequent data collection efforts on banking structure in this vein have appeared, the most substantial of which are the four surveys of banking supervisory authorities in roughly 180 countries undertaken and published by the World Bank. Studies using the World Bank's Bank Supervision and Regulation Survey ("World Bank survey") data continue to proliferate, and we follow in their footsteps here by using the most recent survey data (focusing mostly on 2011) in combination with other relevant data from 2013 to paint a fairly contemporary landscape. However, because our original data set covered 1993, we are able to span an approximately 20-year "then vs. now" time period, which is at least half a decade longer than any other comparable study can cover. Our greater span of time is conceptually meaningful in that our starting point, 1993, is representative of the last broadly stable period-the early 1990s—in financial markets. Indeed, one could argue that the subsequent 20 years constitute the two most turbulent decades in financial markets history.