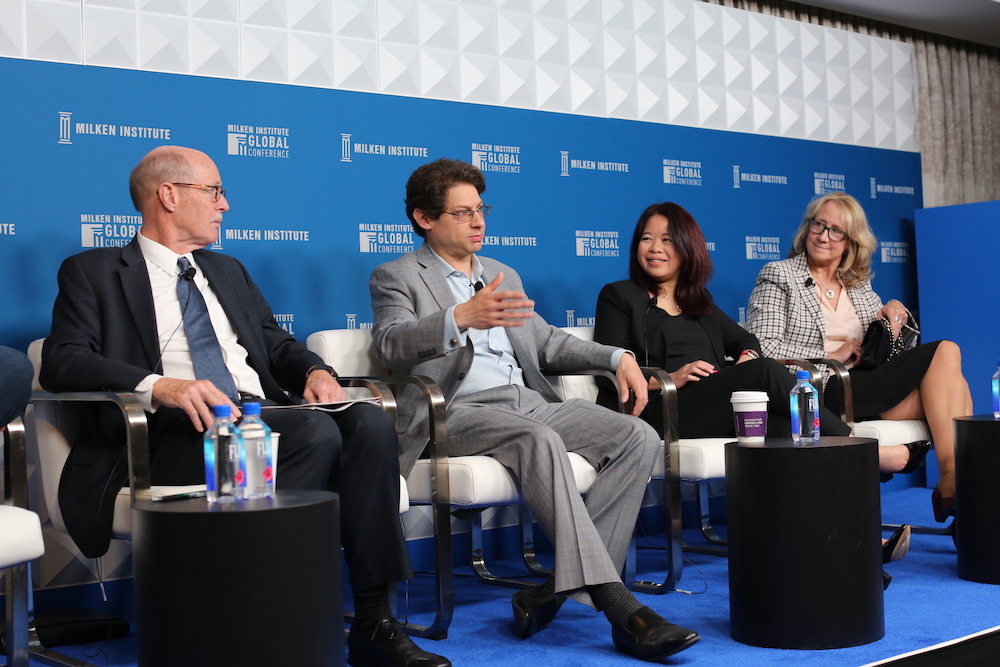 The Milken Institute hosted our annual Global Conference earlier this month, and we were very pleased to include featured several fantastic FinTech panels on a range of topics. Among these, a panel titled “Reinventing Financial Services” featured a fascinating discussion on a wide range of topics. What stood out to us most, however, was that big tech’s invasion of banking appears to be top of mind for many industry leaders. Finastra CEO Simon Paris captured the mood particularly well, cautioning other financial institutions to choose their friends wisely.

Later in the week, Milken Institute Senior Advisor Melissa Koide moderated “Open Data, Open Banking,” a timely discussion of the importance of data portability for the FinTech ecosystem. The panel featured a range of viewpoints from American and international firms, but there was a striking level of agreement from the panelists on the need for regulation in the United States. Elsewhere, our team was pleased to co-host “Enhancing Financial Health for All Generations” with the Milken Institute’s Center for Aging, which discussed the impact that technology might have on the financial health challenges facing Americans both young and old.

Good to see you again, FinTech aficionados. It’s been a while. We’ve been busy traveling, writing, and putting together a little conference that you may have heard of out in Los Angeles. We haven’t forgotten you though, and as we get back into the swing of things, we will begin to feature content from members of the Milken Institute’s FinTech Advisory Committee in addition to your regularly scheduled FinTech updates from around the world. This week, Kabbage’s Co-Founder and President Kathryn Petralia kicks us off by answering some of Jackson Mueller’s burning questions about Kabbage’s business and the impact it is having on small businesses. You can download a PDF of the Q&A here.

Big Tech: Amazon launched a Lending Referral Program in China, which will connect prequalified sellers on Amazon’s marketplace with local lenders who can help them grow their inventory. This comes following the closure of Amazon’s marketplace in China but is intended to help increase the number of China-based merchants on Amazon’s marketplace in the United States. Elsewhere, Sheryl Sandberg responded to growing calls to break up Facebook, and the Stigler Center at the University of Chicago hosted its annual antitrust and competition conference.

Blockchain & Cryptocurrency: Cryptocurrency prices have been on the upswing of late. This is perhaps due to growing interest in crypto-investing among institutional investors, and simply because the Tether story hasn’t yet had the calamitous effects that many predicted. Whatever the reason, there has been an unusual amount of good news in crypto-world, with Fidelity rumored to be on the verge of launching crypto trading for institutional clients and retailers like Whole Foods, which has been testing the waters by accepting cryptocurrency payments through a partnership with Gemini and Flexa. Meanwhile, in blockchain news, a group of large banks is investing in Fnality, a utility settlement coin project aimed at improving clearing and settlement.

Payments: Paytm announced it would offer India’s first credit card with unlimited one percent cashback in a partnership with Citibank. This comes as Paytm has seen increasing competition from abroad, including American tech giants.

Hong Kong: The Hong Kong Monetary Authority (HKMA) continues to issue virtual banking licenses, and recently awarded them to Alibaba, PingAn, Xiaomi, and Tencent. The HKMA stated it would be watching the new virtual banks closely, and keep an eye on their impact on consumers and the banking sector as a whole.

United States: The Chairman and Ranking Member of the Senate Banking Committee wrote an open letter to Facebook expressing concern about the company’s recently announced cryptocurrency project. Specifically, the Senators are concerned about Facebook’s track record regarding data privacy, and whether or not its new project should subject Facebook to regulation under the Fair Credit Reporting Act. Meanwhile, a bipartisan resolution was introduced in the House to recognize the Small Business Borrowers’ Bill of Rights, which was previously developed by the Responsible Business Lending Corporation.

Elsewhere, the Securities and Exchange Commission (SEC) fined Alex Tapscott, a well-known blockchain author, over securities violations. Separately, Commissioner Hester Pierce expressed concern that the SEC has not been clear enough in defining rules for the cryptocurrency industry.